Before the first signs of a toothbrush like instrument to be implemented, its thought that our ancestors used their own finger and a rough cloth to brush and clean teeth.

The use of a more toothbrush resembled cleaning device in its primitive form is thought to have started with the Babylonians and Egyptians, then the Greek and Roman civilisations, at approximately 3000 BC.

Twigs with frayed ends from chewing where used as a teeth cleaning device and at times with some aromatic plants used as somewhat of a breath freshener.

In 1498 AD the toothbrush took a giant leap, finer bristles made from Boar and hog hair where used, much softer on the teeth and gums! Over the next few hundred years the boar/hog bristled toothbrush became neater and more refined till the 17th century. 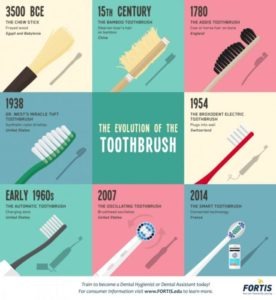 In the 17th century a man called William Addis started mass producing the toothbrush after a stay in jail. While in prison observing the use of a broom to sweep the floor, he decided that the prevalent method used to clean teeth at the time was ineffective and could be improved. To that end, he saved a small animal bone left over from the meal he had eaten the previous night, into which he drilled small holes. He then obtained some bristles from one of his guards, which he tied in tufts that he then passed through the holes in the bone, and which he finally sealed with glue. Ta da! A toothbrush!

By 1840 toothbrushes were being mass-produced in England, France, Germany, and Japan

In 1938 a man called Mr West upgraded the toothbrush, he manufactured a brush that came wrapped in a sealed glassine envelope so as the brush was not exposed to debris before it even got in your mouth and he exchanged the animal hair bristle for finer nylon bristles. By the 1950s, 80 percent of all toothbrushes had nylon bristles

Automatic toothbrushes came along in 1950s and 60s. A battery and rechargeable plug in toothbrush that vibrated elevated the toothbrush to a whole new playing field.

In the 00’s the electric toothbrush updated. The brush head now had the ability to spin, vibrate hard or soft and all of the above!

The humble manual toothbrush we know today is still much the same. Higher market brushes have fancy ad-on’s like a tongue and cheek cleaner but the original designs still fits.

Brushing our teeth has become apart of our everyday routine. Lets see where the toothbrush goes in the next decade.